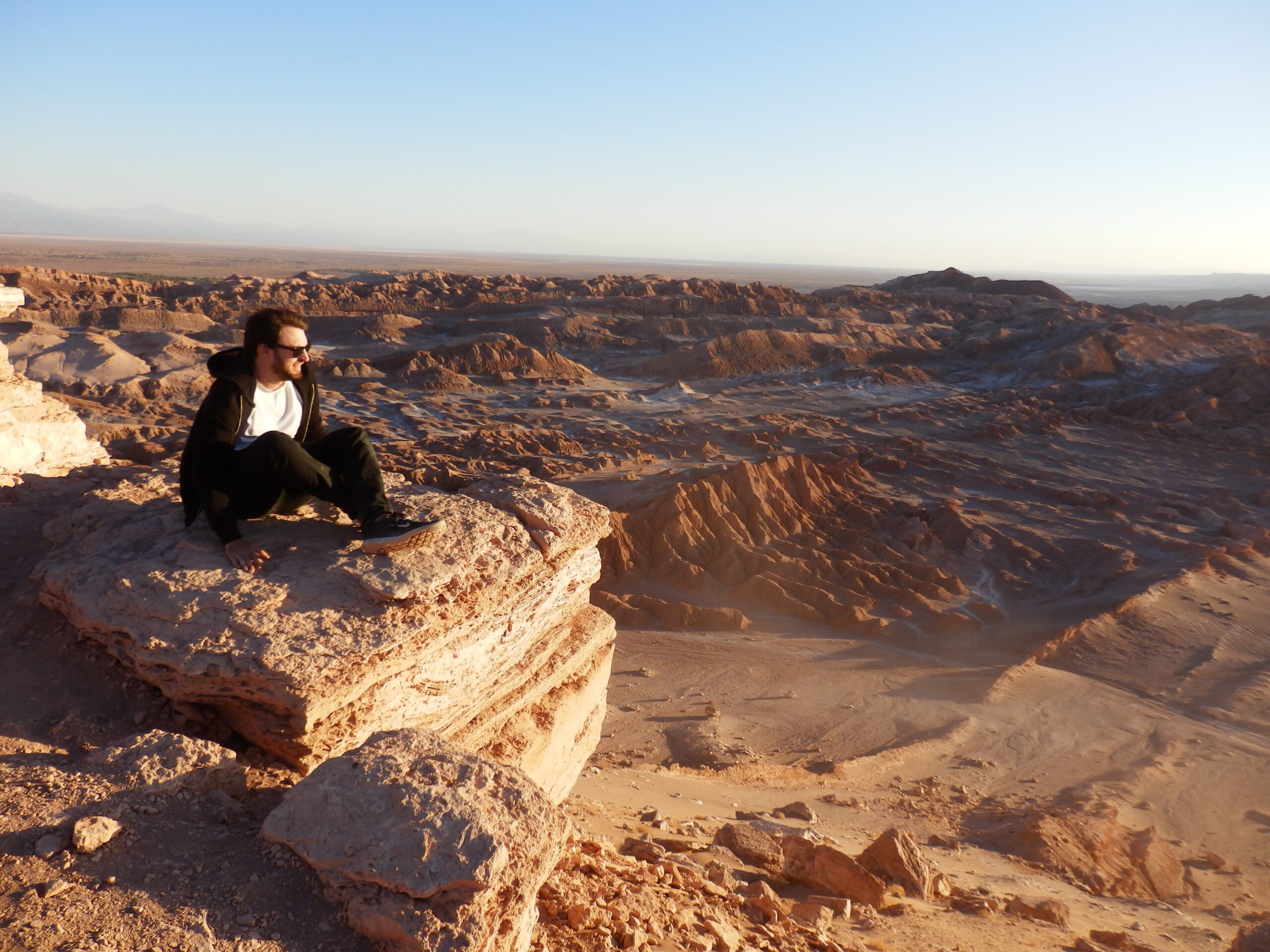 The first thing to say about San Pedro de Atacama, is that it is remote. It took nearly 9 hours to get there from Salta in the north of Chile, much of which was desert and hair-raising winding mountain roads. The experience of this trip was made more interesting by listening to a book called The Road. The true stories of the writer Jack Cerouack, hitchhiking in North America. It is rare when doing a long bus journey to pay any mind to what you see out of the window. But this trip, driving over the Andes and crossing the border, I found myself transfixed by the sights.

Getting off the bus, a wave of dry heat hit me. Atacama is a desert town and that can be seen in every part, from the dry air, sand-covered roads and dormant volcanos that hover over the town. After walking only 10 minutes, which felt like 45 in the heat, we found b&b. However after getting onto the property, we were unable to find anyone. There were guarddogs barking and old paint cans, but no owner. We began to panic. I rapped loudly on the second and smaller buildings door, hoping for dear life that someone was there. There was and we got in.
What is there to say about the town itself.? The streets are lined with canals with running water on every street. Other than that, everything is gear towards tourism. Shops are either selling food, alpacker jumpers or tours. We booked our tours and returned to the b&b.

The first tour was called the lunar valley. Famous and most popular of all tours in the area. It is only a half day tour and started later; it was the first stop to the mars valley, named so because it looks like the surface of mars. It looks extremely dry and is also known to the locals as Death Valley. However, there is an underground lake running under either it. Second stop, we climbed a sand dune. This was hard work as at altitude every step tires you out. From the top, you get an amazing view. 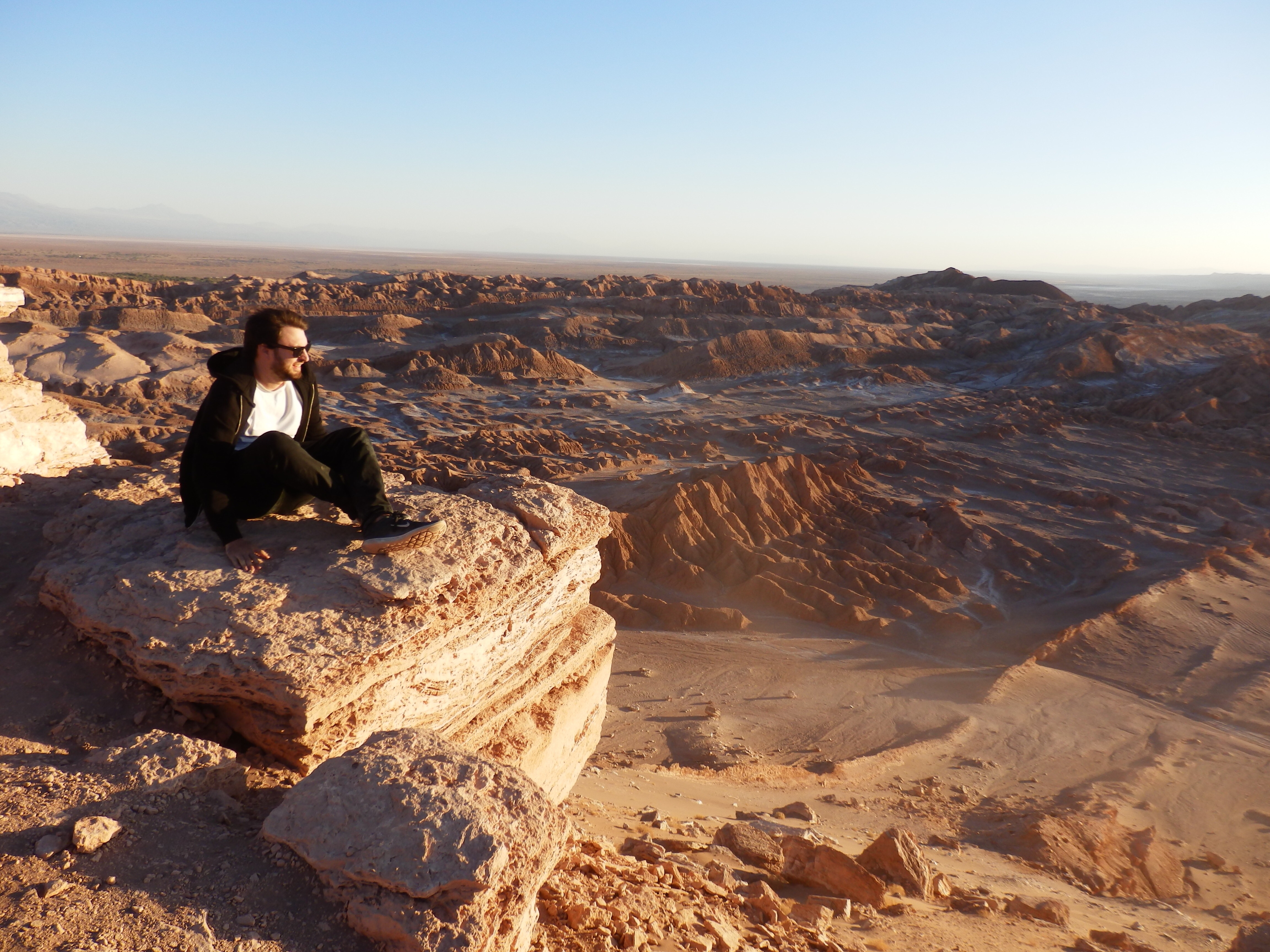 The final stop on this tour is to the Luna valley. They time it so that you get there slightly before sunset. The most amazing thing about it was to see the colours change when sun went down. There weirdest was seeing a random guy walking around in a Spider-Man outfit. 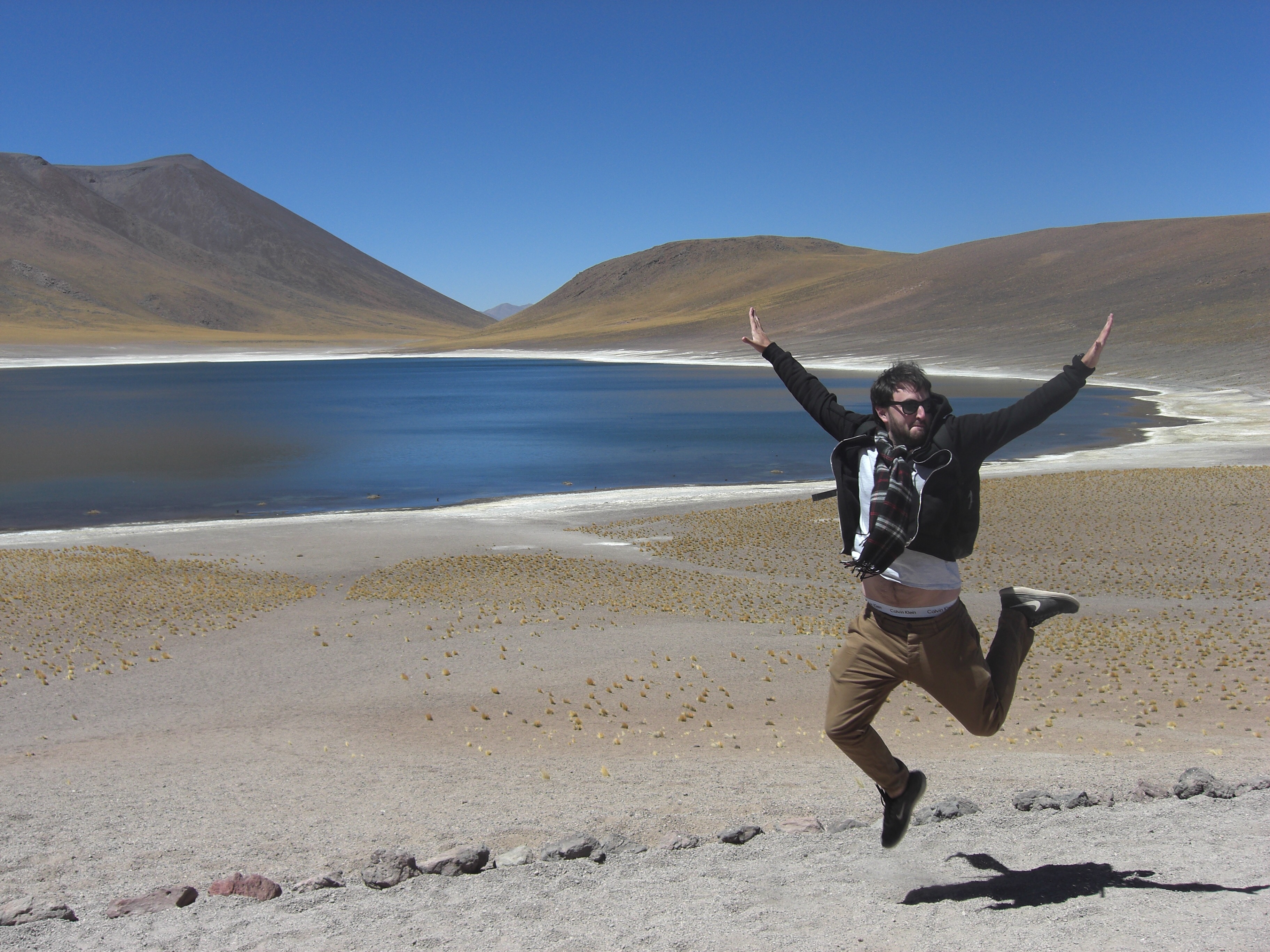 On the second day the second tour met us at our b&b at 6:30 in the morning. Both pretty grumpy about being up so early, we were bundled into the back of a van full of Italians. It was a full day tour. We saw amazing rock formations and brightly coloured altiplano lakes. By lunch, we saw the salt flats. These were not the famous one from uyuni but the third largest in the world salt flats. In the flats, there are some areas of water, in which can be found a small collection of flamingos. That was the final stop of the day. we got back to town and enjoy a very nice pizza in an adobe hut and listened to local music. 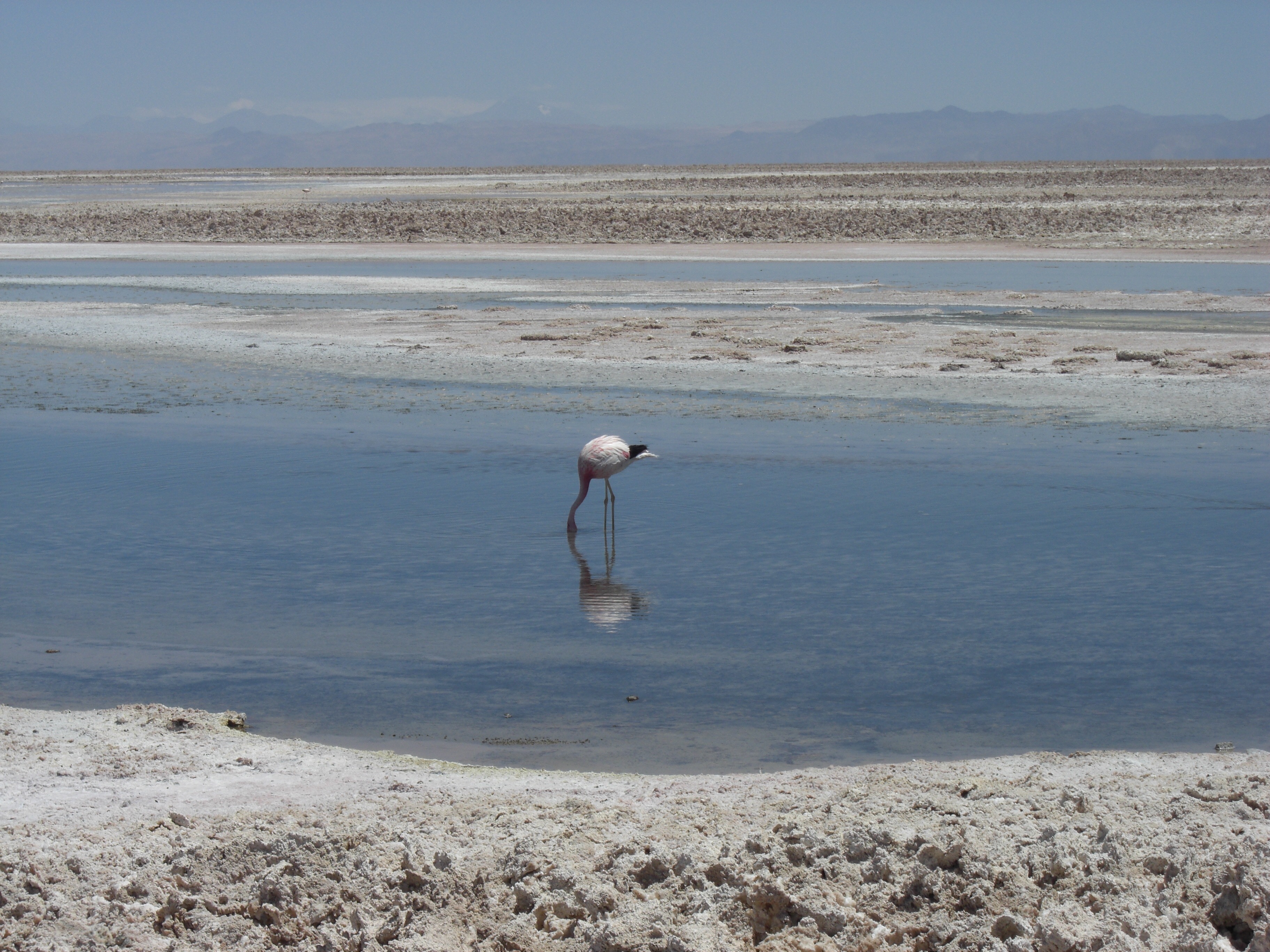 The third tour was to the geysers. The van picked us up at 4:30am this time and we were off. The van was freezing as this area can get down to -10 degrees. We were not prepared for this weather as all our clothes were shorts and summer things. Tired and cold we got to the geysers. They are the biggest in the Southern Hemisphere and the water plumes are made bigger by the low temperatures of the morning. The rest of the day is a little bit of a blur, as we were so tired. More amazing wild life like llamas. We got back to the town and slept. After two days with less than 9 hours of sleep, we were spent. 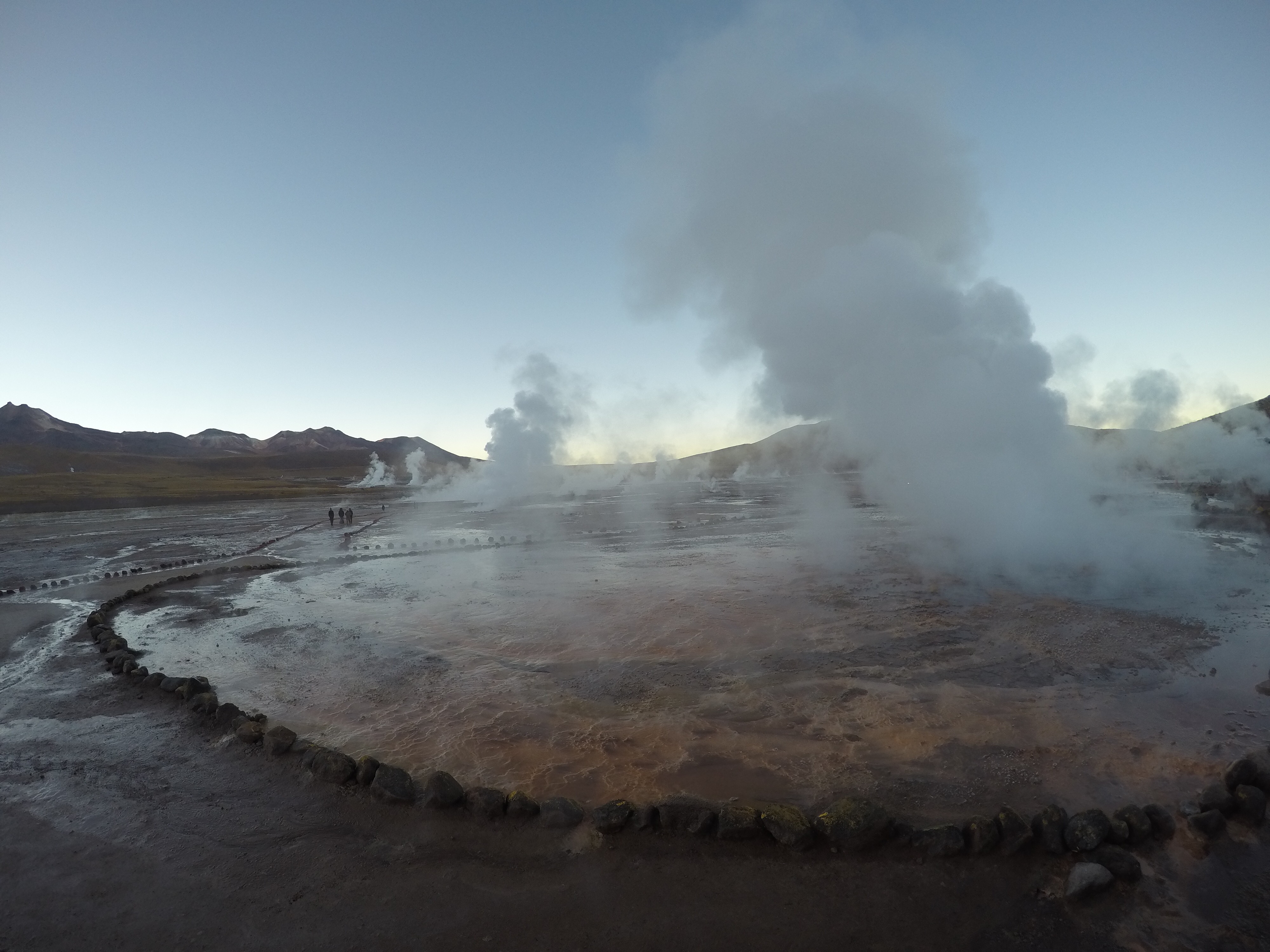 After a very long nap, we went into town and made our preparations for the uyuni flat flats tour. This is full three days, we needed a lot of food, water and warm clothes.

Many people miss out Atacama on their tours of South America, I think this is a massive mistake. I strongly recommend it.